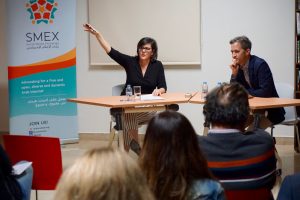 BEIRUT, Lebanon, Tuesday, Feb. 28, 2017 — Dozens of free speech advocates and civil society leaders gathered at the SMEX office in Badaro last night to engage with UN Special Rapporteur on the Promotion and Protection of the Right to Freedom of Opinion and Expression David Kaye. They held a lively conversation on Lebanon’s current limitations on free speech and discussed tangible ways to protect and expand the right to freely express ideas publicly.

“Freedom of expression is under attack around the world,” UN Special Rapporteur David Kaye noted early in the conversation, specifying that governments most often use “national security” or “public order” as a pretext to restrict speech. Lebanon is no exception. SMEX Co-Director Jessica Dheere highlighted three recent high profile cases, including the arrests of Bassel al-Amin and Hassan Saad, that jeopardize the right to articulate one’s opinion online.

As threats to free speech are renewed in Lebanon, the UN Special Rapporteur encouraged attendees to report to his office time-sensitive cases that involve the criminalization of expression. He asserted that the latter’s censorship cannot wipe out an idea, but merely render it invisible. And while the UN offers some recourse when governments infringe on their citizens’ rights, Kaye also highlighted the positive role governments can play to uphold internationally recognized human rights. This can be accomplished, he said, by creating space for the media to operate and by promoting diversity, independent voices, and net neutrality. Asked about the UN’s responsibility in the private sector, Kaye expressed that — despite the difficulties of challenging companies operating within their own standards — investigations into the impact of corporations on international human rights are ongoing.

As the digital age presents new challenges to local activists defending rights, online and offline, SMEX is collaborating with its allies to ensure the protection of inalienable rights such as those recognized in Article 19 of the International Covenant on Civil and Political Rights. The conversation continues on Twitter via #Leb4FoE.

You can watch the discussion below.