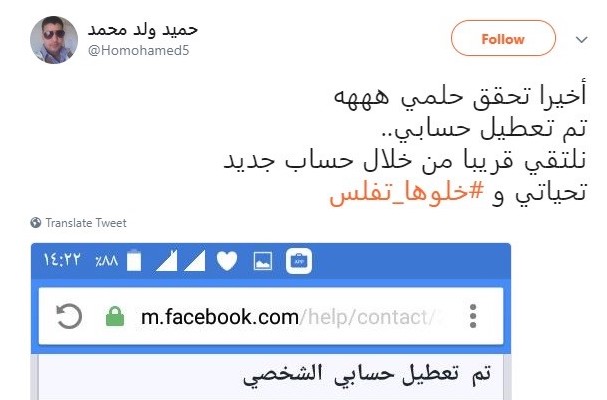 Mauritanian activists accused local telecom operator Mauritel of reporting some of their accounts on social media. This move, they say, comes after more than a week since they launched a digital rights campaign demanding that the company restore services it had removed and improve the quality of its services.

The campaign rallied against Mauritel’s increasingly bad mobile internet service, its cancellation of an unlimited internet plan, and its unresponsive customer service.

“The attack on the accounts of activists in the Facebook campaign shows that the #LetItGoBankrupt campaign has already affected the telecommunications company Mauritel,” a Mauritanian citizen, who wished to remain anonymous, told SMEX.

He added that activists blamed the company for reporting their Facebook accounts because of “the almost simultaneous suspension of their individual accounts. Indeed, almost 20 accounts were reported and banned at the same time.”

Mauritel’s abrupt cancellation of unlimited internet access was the main motivator for the launch of the #LetItGoBankrupt campaign. The company’s move sparked outrage and a litany of complaints against the company, said Jedo.

The campaign, added Jedo, mimicked similar ones from neighboring countries such as a dairy boycott campaign #LetItSpoil (خليه_يريب#) in Morocco, which protested a price hike in dairy products.

The #LetItGoBankrupt campaign limited its activities to social media as activists acknowledged that “traditional outlets such as television stations would be put under financial pressure since Mauritel might threaten to pull their ads,” a Mauritanian citizen told SMEX.

Activists are expected to escalate their demands. Already, they have called for an actual boycott on the first day of Ramadan, with directions for individuals to suspend use of their Mauritel lines for several days. This initial boycott will be followed by other actions during Ramadan if the company continues to ignore their demands.

Mauritel – a subsidiary of Telecom Morocco – does not provide public reports of its privacy policies or its terms of service, according to a recent report published by SMEX titled “Dependent Yet Disenfranchised: The Policy Void That Threatens the Rights of Mobile Users in Arab States.”

Indeed, the absence of the terms of service and privacy policy, which companies are required to make publicly available to users, allows telecommunication companies to stop or omit certain services without ever notifying their users.

In that vein, SMEX calls on all telecommunication companies in the region to publicize their terms of service and privacy policies, which safeguard users and corporations’ rights equally. These recommendations go hand in hand with the United Nations guiding principles for business and human rights, also known as the Ruggie Principles.