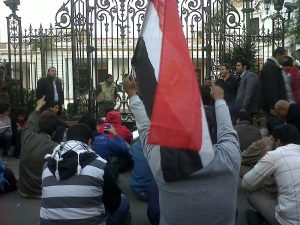 The Committee of Suggestions and Complaints in the Egyptian parliament accepted and referred the contentious draft cybercrime law to the joint Legislative Affairs – Communication and Information Technology Committee last week. The draft law, which is expected to be adopted soon, has been criticized by civil society and human rights organizations for its vague definition of cybercrime and the proscription of harsh punishments.

Article 15, for example, establishes that if a service provider doesn’t abide by the law and the result is death or the compromise of national security, punishments can include life imprisonment, the death penalty, or a fine of between 5 million and 20 million Egyptian pounds.

In an opinion piece for Egyptian independent news site Mada Masr, human rights activist Mohammad El Taher asserts that passage of the law “will transform Egypt into a repressive regime on the scale of repressive countries such as China, North Korea and its ally Saudi Arabia.” Further, El Taher claims that the draft law is trying to close the space for information sharing instead of targeting crimes.