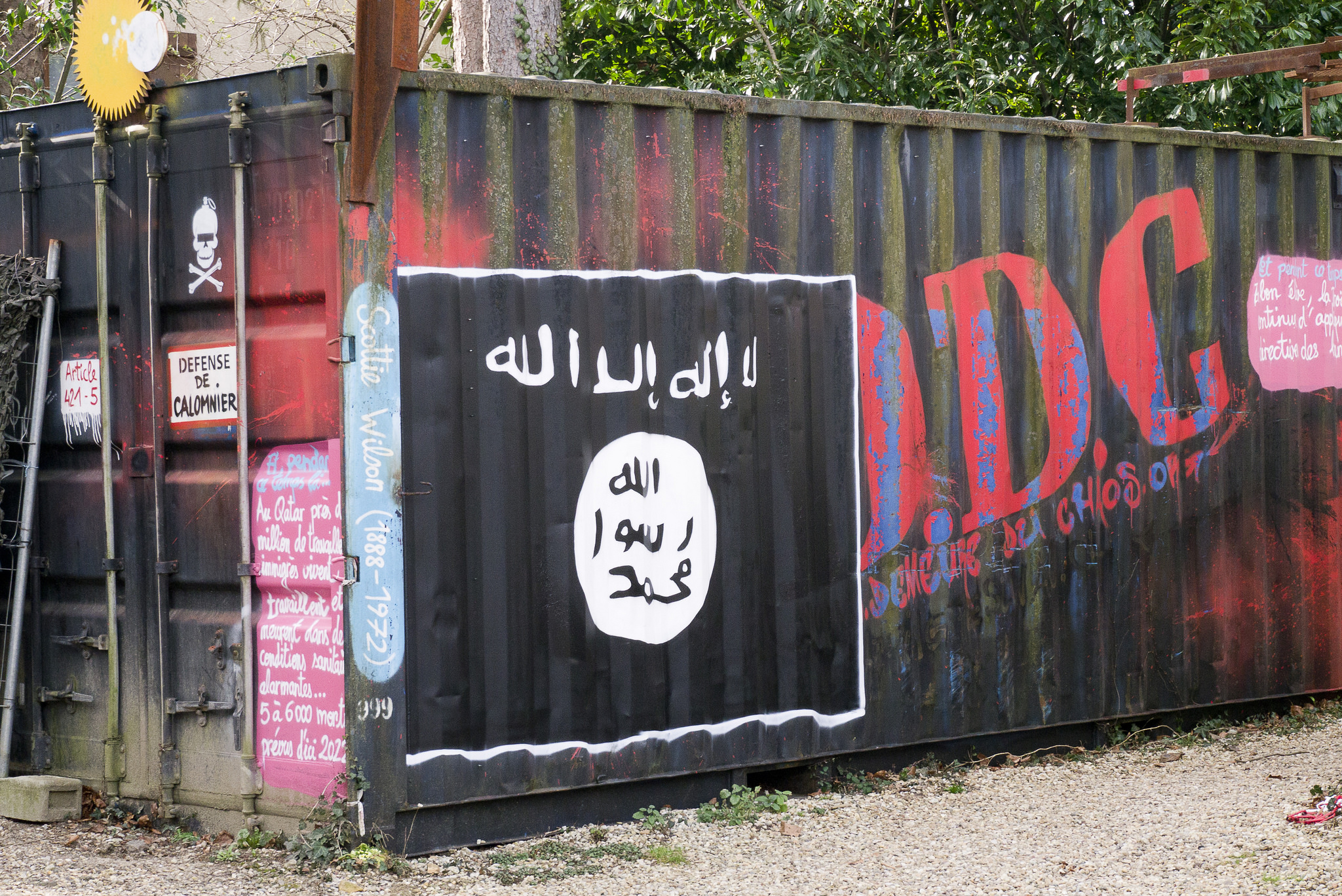 Feature image by thierry ehrmann, CC BY 2.0
Digital Citizen has been re-published from digcit.org
Digital Citizen is a biweekly review of news, policy, and research on human rights and technology in the Arab World.
In the face of regular suspensions from platforms like Facebook and Twitter, supporters of Daesh (also known as ISIS, or Islamic State), launched their own social networking site called 5elefabook, which comes from the Arabic word for “caliphate.”
The site, which was created on 3 March, has been removed by its creators on 8 March out of security concerns for its members a day after it went live. A Twitter account associated with the site has also been suspended. Registered with Arizona-based GoDaddy web-hosting company by an admin based in Egypt, the site did not even use encryption which would make it easy for intelligence agencies to spy on its users.
And in other social media-related news, Twitter has begun requiring phone numbers from Tor users in order to register new accounts on the service, endangering those who count on Twitter’s relative anonymity.

The Facebook page of the news site elbark.com was hacked and a link to an article about declarations made by director of a telecommunications company was removed. In the article, elbark.com reported that Joseph Ged, director of Ooredoo Algeria, said that his company won’t advertise on media that criticize Qatar or Algeria. The news site had since recovered its Facebook page.

Algerian authorities arrested and sentenced labor rights activist Rachid Aouine to six months in jail over a Facebook post addressed to local police authorities. Intending to be ironic, Aouine wrote: “police officers, why don’t you go out today to protest against the arbitrary decisions against your colleagues…instead of controlling the free activists and the protesters against the shale gas?”.

He was arrested on 1 March and accused of “inciting an unarmed gathering.” Aouine was referring to a decision by Algerian authorities to take disciplinary actions against a number of police officers for protesting.

Another Facebook user was sentenced to six months in prison on 11 March. A criminal court in the capital Algiers convicted Abdelghani Aloui, aged 25, of ‘insulting established institutions’ on facebook. Abdelghani’s case dates back to late 2013 when he was arrested for publishing cartoons of Algerian President Abdelaziz Bouteflika, and spent seven months in preventive detention.

The watchdog’s decision followed a complaint brought by a number of human rights groups—including Privacy International and Reporters Without Borders—into Gamma’s business conduct and lack of human rights policies.

A court in Bahrain postponed issuing an appeal verdict in a case brought up against human rights defender Nabeel Rajab to 15 April. In January, Rajab was sentenced to 6 months in jail for “denigrating an official body” in a tweet that described his country’s security institutions as the ‘first ideological incubator’ of those who join ISIS. A travel ban imposed on Rajab remains in place.

On 26 February, Egypt’s prosecutor general imposed a media gag order on the case of lawyer Karim Hamdy, who died after torture in a police station at Cairo’s Matariya Police Station. The Matariya district is a hotspot for Islamist anti-government protests. The head of the forensic authority confirmed to Amnesty International that Hamdy’s body bore marks consistent with torture, including broken ribs. The 28 year-old was arrested on charges of arms possession and protesting without an authorization. Two other detainees held with him died in similar circumstances.

23-year-old Karim al-Banna is in hiding after a court in Egypt confirmed a three year jail term against him for expressing his atheism on facebook. Prior to the release of the verdict, al-Banna said that he was seeking to flee Egypt, where “life is not possible for atheists”.

Al-Banna was arrested in November and spent 55 days in detention before he was released on bail. He was convicted of contempt of religion and insulting the divine.

Egypt established the High Council for Cyber Crime in December last year, ostensibly to develop a cyber security strategy. But the council’s mandate and ensuing statements indicates a broader shift towards surveillance of activists and opposition alike, but under the guise of protection against “bad guys” as in the US and UK, rather than outright denial that such surveillance is even taking place.

The independent Jordanian news site 7iber.com, which refused to comply with a 2013 law requiring news websites to register with the government, finally relented after increased pressure on the organization. In an interview to the International Press Institute, 7iber.com editor Lina Ejeilat said that repeated blocking and a court case against the site propelled the publication to apply for a government license, which was granted in late 2014.

On 23 February, satirist Charbel Khalil appeared before a prosecutor, after the country’s top Sunni religious authority filed a complaint against him for allegedly insulting Islam.

Khalil was questioned over a photo he shared on Twitter, which depicts a woman wearing a short dress under a black robe, sitting on a black bed cover with the Islamic slogan: “There is no God but God and Muhammad is his Prophet”. It was accompanied by the caption: “sexual jihad under the Prophet’s umbrella??” Though Khalil was not arrested after the questioning, his case was referred to an appeals court and he was banned from traveling pending an investigation.

Free speech advocacy group March launched a legal hotline that Internet users in Lebanon can call should they be summoned by the Cyber Crime and Intellectual Property Rights Bureau for questioning. The bureau, which investigates serious crimes committed on the cyberspace such as cyber-terrorism or fraud, has been involved in questioning a number of individuals for merely expressing themselves on the internet.

A court in Oman sentenced prominent blogger and activist Saeed Jadad to three years in jail over a letter he addressed to US president Barack Obama. In the letter published on the web on 31 May 2013, Jadad criticized US human rights policies in Gulf countries. He was convicted of undermining the country’s position and prestige, calling for gathering, and disruption of public order through his publications on social media.

Omani writer and blogger Muawiya Al Rawahi is reportedly being held incommunicado in the UAE after trying to cross the border into the country from Oman on 23 February. Muawiya is known for his political activism and has been critical of the UAE royal family on his Twitter account, @muawiyaalrawahi.

Saudi Arabia sentenced a man in his twenties to death after expressing anti Islam views online. In a video posted on the social networking site Keek last year, the man reportedly renounced his Muslim faith before ripping a copy of the Qur’an.

Blogger Raif Badawi sentenced to 10 years in jail and 1000 lashes for criticizing Saudi Arabia’s religious police and clerics is once again facing the risk of death penalty. Badawi’s wife Ensaf Haider told The Independent that judges want re-try him for apostasy, a crime punishable by death in the conservative kingdom. In 2013, a judge threw out the charge of apostasy against Badawi.

The blogger received 50 lashes in January, prompting international condemnation of Saudi Arabia’s human rights record. The remaining 19 rounds of lashing had since been halted for medical reasons. In a statement, the Saudi foreign ministry expressed “surprise and dismay” at criticism of Badawi’s case, rejecting any interference in its internal affairs.

Anonymous whistleblower @mujtahid is back to Twitter after his account with more than 1.7 million followers was suspended by the social networking site early in March. On Twitter since 2011, @Mujtahid has been publishing leaks about the luxurious lifestyle of and corruption inside the royal family. In January, he reported the death of the late king Abdullah hours before it was officially announced. Speaking to Middle East Eye, Mujtahid accused Twitter of giving in to pressure after suspending his account.

A group of Syrian activists in ISIS-controlled cities of ar-Raqqah and al-Bukamal are using social media to expose crimes committed by extremists and share photos and news from the occupied cities. These activities already landed two of the activists in the custody of the group; they were released a few days later.

On 16 February, 71 human rights groups called on the Syrian government to release Mazen Darwish, Hani Al-Zitani, and Hussein Gharir, from the Syrian Center for Media and Freedom of Expression (SCM) three years after their arrest.

The three activists face accusations related to their rights activities including monitoring online news and publishing the names of the dead and disappeared. Darwish’s wife Yara Bader, who is currently serving as the acting director of SCM, was also arrested in 2012 but was soon after released.

The satirical news site tounesnews.com is back online after it was shut down by the web hosting service OVH following a removal request from the Tunisian authorities for spreading false news. The site was reportedly closed over a satirical article on tax evasion by the head of the industry and commerce union.The webhost had refused to hand over data related to the site’s administrators without a court order.

Authorities in Abu Dhabi arrested an American expat upon his return to the UAE, for comments he posted on Facebook while he was in Florida. Ryan Pate slammed his employer, Global Aerospace Logistics, after he was denied a sick leave extension. His employer filed a complaint against him under the country’s 2012 Cyber Crime Law, which make it an offence to use the net to mock or deride organisations and individuals. He risks up to five years in jail.

For months, activist Samia Al-Aghbari has been the target of a campaign of harassment and threats, causing her to temporarily take down her Facebook page and wear a niqab to cover her face. One such threat on her Facebook page said: “I swear to God that slaughtering you would be a promenade, don’t get your ugly face out.”

Al-Aghbari is one of a number of female journalists and activists who have constantly been accused of blasphemy or being a “non-believer” by religious fundamentalists for simply expressing certain ideas as a result of their political beliefs and activities.

“Whoever stands against them, they will accuse him or her of blasphemy and spoil their careers and reputations, in order to make society react negatively to what journalists and activists write or say,” she said. “There is a systematic campaign against every woman who doesn’t wish to idly subject to others’ thoughts.”