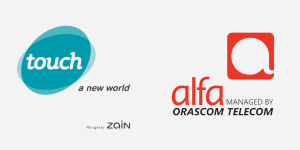 A self-described independent youth movement is waging what it is referring to as a “polite struggle” (الكفاح_المهذب#) against state corruption in Lebanon, taking particular aim at the Telecommunications Ministry.
Fed up with the high cost of cell phone services, online activists are calling for a one-day boycott of the two state-owned mobile phone operators, Alfa and touch, on Sunday Jan. 8, 2017. The organizers of the campaign, run under the two hashtags “Close your line” (سكر_خطك#) and  “I will close my line” (رح_سكر_خطي#), are calling on smartphone users to switch their phones to airplane mode on the day of protest. As an alternative, they are asking supporters of the campaign to use instant messaging apps over Wi-Fi to text and make calls.

Claiming to be motivated solely by patriotism, the online campaigners have two stated goals. The first, is to reduce the cost of domestic and international calls and the second, is to eliminate monthly “recharging”  fees required to keep a phone line active.

The Arab Advisors Group, a Jordan-based research and consulting firm, compared the cell rates of 39 mobile phone operators across 16 Arab countries, classifying the latter on the basis of their relative pricing status. They found that Lebanon has the highest prepaid cellular package rate in the Arab world, as reported by Byblos Bank’s economic research publication Lebanon This Week. Up to May 2015, consumers in Lebanon were paying $25 per month, with no notable decreases since, whereas the Arab average is $7.67 and the Arab median is $5.32.

For context, note that Lebanon’s minimum wage stands at $450 per month, making these costs a significant burden on the 32 percent of the population that lives in poverty.
The research group also surveyed three types of users and compared the average fee each paid per month: light (consuming 250-300 local minutes and 300MB), medium (500 local minutes and 500MB), and large (1000 local minutes and 1GB). The researchers revealed that all user types buying a prepaid package in Lebanon are paying the highest fees among the surveyed Arab countries. The average rate for “light” users came at $83.5 per month in Lebanon, whereas the regional average rate is $32.13. “Medium” users paid $135.5 per month, whereas the Arab average rate is $56.72. Finally, a “large” consumption cost an average of $270.45 per month, as opposed to the regional average of $111.27.

Taking on their second grievance, the validity period of prepaid mobile lines, online activists have been recording calls with Alfa and touch representatives. In one audio recording, a mobile subscriber makes the point that cell phone lines are paid for and bought, not rented, asking the call center employee to explain why users must repay an additional fee each month. The two mobile phone operators require prepaid cards to be recharged every 30 days, penalizing those who miss the deadline by seizing their remaining credit and then completely taking over their line, forcing them to buy a new one.

Lebanon again takes first place in terms of cost of service, offering subscribers the shortest validity for prepaid cards. In contrast, according to the same Arab Advisors Group study, Arab countries surveyed averaged a validity of 279 days with the exception of the UAE and Algeria, which offer their customers an unlimited period of use.

Touch, operated by the private Kuwaiti telecom provider Zain, had 2,299 million subscribers as of September 2016. Alfa, operated by Egypt’s Orascom Telecom Holdings, states on its website that it currently serves close to 2 million subscribers. Organizers of the “polite struggle” are hoping 1 million mobile phone users will participate on Sunday by shutting off their phones for at least six hours, estimating the two mobile companies will lose several million dollars.

In addition to the exorbitant mobile rates highlighted by this campaign, cell phone operators in Lebanon also engage in unethical practices. In June 2015, SMEX reported on a paid ringtone service that was not only being added to subscribers without their consent, but also required them to pay a fee to opt-out of it. While SMEX, in coordination wit the Ministry of Telecommunications, forced the mobile phone operators to make a modest concession by eliminating the opt-out fee, many mobile users are still paying for a service they never signed up for and may not even be aware of its monthly charges.

The Middle East and North Africa, like other parts of the world, have repeatedly witnessed similar citizen-led efforts to make demands from mobile and internet providers. In January 2016, Morocco’s decision to block Voice over Internet Protocol (VoIP) calls resulted in a wide boycott campaign to protect internet freedom. In October 2016, Omanis, also frustrated with the high prices charged by their own service providers, opted to engage in a week-long boycott of their local telecom companies. Also in October 2016, Saudis boycotted their wireless network operators to protest the bad service provided and the ban of some apps. The month-long protest also included performed displays of anger with activists filming their modems set on fire.

In Lebanon, the telecom industry generates the government’s second largest revenue after taxes, amounting to $1.43 billion in  2013. In 2014, telecom revenues went up by 41 percent, according to a May 2015 report by BLOMINVEST Bank, amounting to $2.01 billion. So any disruption to this flow of capital, used in part to pay off public debt, is bound to have an impact on the way mobile service providers treat, or mistreat, their customers.

Editor’s Note: An earlier version of this article incorrectly placed Lebanon’s poverty rate at 40 percent. It has since been updated to rectify the error.

[Expired] Call for Applications: The SMEX Fellowship for Reporting on Digital Freedoms
Youth, Internet, and Technology in Lebanon: A Snapshot