The TikTok Case: A New Platform to Oppress Women in Egypt 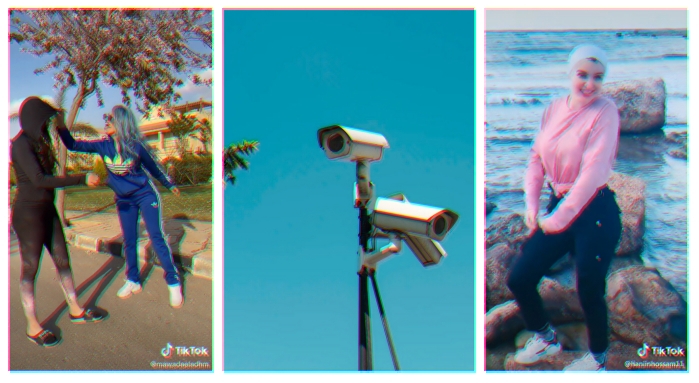 Egyptian authorities are arresting an increasing number of women on different charges related to their social media activity; in some cases, female TikTok users are receiving prison sentences and forced to pay hefty fines.  The most recent case, which asserts that the accused women’s videos on TikTok stand in “violation of Egyptian family values,” may be fundamentally unconstitutional and only raised to advance a political agenda.

In an August 17 court hearing, lawyers filed an appeal on behalf of Haneen Hossam and Mawada al-Adham, sometimes referred to as the “TikTok Girls.”. However, the Court adjourned until September 14, after the defense filed a motion to view the investigations, videos, and technical reports; play the video in question; and listen to the statements of the investigating officer. The two women had been sentenced to two years in prison and a fine of 300,000 Egyptian Pounds (roughly USD 20,000), for “violating family principles in Egyptian society” by posting “indecent” videos “violating public morals”, announcing “immoral” meetings, and encouraging young women to use these platforms, according to the authorities.

Hossam, whose TikTok account reached around two million followers in April, was arrested after the Supreme State Security Prosecution (SSSP) charged her with “human trafficking by engaging with natural persons, young girls, and using them for profit in actions infringing on the principles and values of Egyptian society.” In May, al-Adham, another TikTok star in Egypt with two million followers, was also arrested for “violating family principles in Egyptian society.”

During the hearing on August 17, Masaar (Technology and Law Community), an Egyptian organization that focuses on digital rights within the Egyptian legal framework, submitted an objection to Cairo’s Misdemeanors Economic Court of Appeal. According to Masaar, Article 25 of the Anti-Cyber and Information Technology Crimes Law (“Cybercrime Law”), which punishes “anyone who violates the values and principles of the family in Egyptian society,” and in terms of which Hossam and al-Adham were charged, is unconstitutional on a number of grounds. Firstly, Article 25 lacks the clarity and specificity Article 95 of the Constitution requires of criminal law, as the phrase “assaulting the principles and values of the Egyptian family” is ill-defined and open to a variety of interpretations. Article 25 of the Cybercrime Law also violates the constitutionally-protected right to freedom of expression.

Hassan al-Azhari, a lawyer and legal scholar at Massaar, told SMEX that Article 25 and 26 of Chapter 3 Cybercrime Law concerns privacy and data protection. “Thus, the matter of family principles cannot be interpreted in disregard of these two articles and the concept of privacy,” he said. However, according to al-Azhari, the prosecution misinterpreted the text: “as long as the individual shares his/her photos with the public himself/herself, and relinquishes himself/herself safeguards provided in this context, he/she is the one to decide the scope of his/her privacy in public, and will not have violated anyone’s privacy.”

What Lies behind the Campaign of Arrests against Female Social Media Users?

The arrest of the women stirred considerable controversy in Egypt. While some believed it targeted women and freedoms in general, others’ views aligned with the public prosecution, which considered these videos “a violation of Egyptian family principles.” However, some people believe that the entire campaign is driven by a political agenda.

At that time, the media and experts were covering the “terrifying COVID-19 scenario in Egypt,” and questioning government figures. Some even considered Egypt “a source of virus proliferation,” due to the Egyptian authorities’ failure to take rapid precautionary measures, such as imposing a lockdown and preventing gatherings, in order to try and maintain revenues from tourism.

Indeed, Egypt has witnessed a wave of arrests of men and women, even doctors, expressing their opinions on social media concerning COVID-19 and the way authorities were handling the pandemic. The Egyptian Association for Freedom of Thought and Expression (afte) documented SSSP subpoenas to dozens of citizens as a result of their posts on the COVID-19 pandemic in Egypt, in addition to blocking access to several independent sites.

Returning to the case of Hossam and al-Adham, in a statement published on its Facebook page, the SSSP noted that “the Statements and Orientation Department (a department under the Public Prosecution) monitored citizens’ interaction with TikTok videos and received a complaint regarding the videos in question.” As a result, it called upon the police to investigate these TikTok users.

In addition, according to al-Azhari, “there is a general trend that considers the Internet a space to be controlled.” For this reason, authorities tend to “impose and increase financial constraints to make it difficult for people to use the Internet, or impose fees on online earnings.” These measures have been surfacing for years. In 2018, a report revealed that the Egyptian government bought mass surveillance technologies from Ercom, a French digital security company, in 2014, with the blessing of French authorities. Other attempts to exercise control over the Internet include the endeavors by authorities to propose and approve draft laws in Parliament to add online restrictions, such as the draft law to impose taxes on Facebook ads, block thousands of websites, try to block websites such as YouTube, and imprison individuals because of their videos on social media, etc.

The last of these attempts materialized in authorities seeking to impose fees on Internet use and potential online earnings.  In other words, according to al-Azhari, authorities tell you that “if you are earning money online, you should pay a tax, otherwise, your activity is illegal.” In fact, the State, which might not know how the number of views translates to potential earnings in the case of the female TikTok users, indeed understood that the Internet is a space for people to make money. Therefore, it prohibited Egyptian production companies from sharing their videos on YouTube, and forces them to release the videos on Watchit, a State application with a subscription fee. Al-Azhari further mentioned that it also imposed taxes on applications such as Shahid, Netflix, etc. Thus, “the State will not accept that a group of women making money through an application, but it does not not understand the link between views and earnings,” according to al-Azhari.

In conclusion, legislation needs to be reviewed and it is necessary to call for the suspension of certain laws. Per al-Azhari, “laws may be used for political purposes, or against the interest of users,” therefore, “it is imperative to return to the essence of Egyptian law’s legislative philosophy, that is grounded in protecting and not oppressing the accused.”

Digital Content Manager at SMEX. Digital safety trainer and freelance journalist. Interested in technology, economics and entrepreneurship. Follow him on Twitter @kataya_abd.
How To Make A Privacy-Oriented Application During A Crisis
How The Global Internet Disruption Affected Lebanon