Limiting Palestinian Free Speech Online is no Solution to Cybercrime 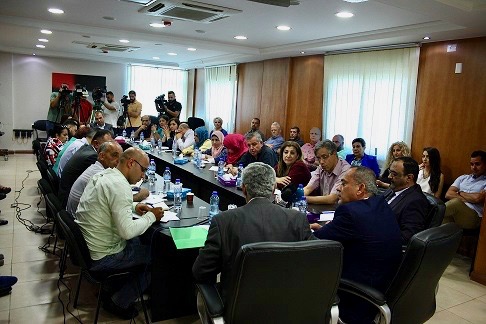 Palestinian human rights and civil society organizations have called for a freeze on the recently publicized cybercrime law that was approved by Palestinian Authority (PA) President Mahmoud Abbas on June 24, 2017.
In a press statement released by the Palestinian Center for Development and Media Freedoms (MADA), the new law was criticized for its potential violation of “public freedoms, freedom of expression and the right to privacy.” Member of the Union of Palestinian Journalists’ General Secretariat Nabhan Khreisheh expressed to Al-Quds Al-Arabi his concern that the law will hinder constructive criticism of the political system out of fear of the consequences. In addition to jail sentences ranging between 3 and 15 years, violators of the law could also be fined up to US $7,000.
SMEX translated three of the cybercrime law’s articles to convey the urgent need to halt its implementation, which will stifle free expression online and threaten civil and political rights.

In the context of the increasing restrictions on press freedoms, MADA’s general director, Musa Rimawi, noted that a number of journalists have been arrested and 29 news sites were blocked in the West Bank in the past few months. This law heightens and legitimizes these violations, which could grow under cover of the judiciary.
SMEX joins Palestinian organizations in condemning this cybercrime law and echoes the call to enact a new law that respects the right to unhindered speech online and the free flow of information while protecting internet users from the real threats they face, including extortion and fraud.
You can view the PA’s new cybercrime law on the website of Palestinian radio station 24FM. We encourage you to follow the development of our Arab Digital Rights Dataset to learn more about regulations affecting online users in the 22 countries of the Arab League.