Policy makers in Lebanon are taking “reform” measures that will benefit the telecom sector at the cost of depriving hundreds of thousands their right to communication.

On May 27, Lebanon’s cabinet approved two bills proposed by the Minister of Telecommunications, Johnny Corm, that will be detrimental for struggling families and individuals. The first is to raise telecom tariffs to Sayrafa rates, which would triple or quadruple the current prices, making it roughly 1/6th the minimum wage. The second decision entails completely terminating the 2G network, and parts of the 3G network, to cut costs amid “the imminent collapse of the telecommunications sector.”

Over the next few months, 2G mobiles will be useless for making phone calls or exchanging  SMS, as they will stop receiving network coverage. This will leave more than 230,000 subscribers without access to mobile services unless they upgrade their devices — if they can afford it.

Why will the Ministry of Telecommunication (MoT) terminate the 2G and 80% of 3G infrastructure? To understand the implications of this decision, we need to understand the differences between GSM and 3G, and LTE (4G) and VoLTE (4G Calling).

What is the difference between GSM, 3G and LTE (4G)?

As many might already know, 2G cellular devices operate on the GSM network that allows sending text messages and performing phone calls without the option to connect to the internet. The Lebanese MoT will be gradually taking down this network until it becomes obsolete by 2025.

3G Is the third generation of the previously mentioned technologies, notably 2G.

Below is a comparison table of the two technologies: 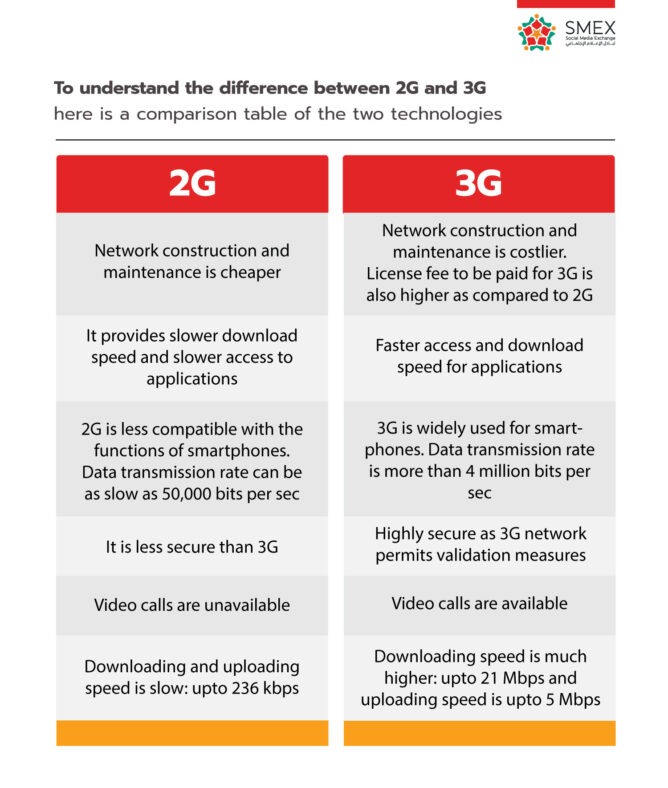 Reference of the above table: https://www.geeksforgeeks.org/difference-between-2g-and-3g-cellular-network/

4G is the term used to describe LTE (Long Term Evolution) and more advanced upgrades to 3G networks such as HSPA and Mobile WiMAX. The main objective was to create higher data speeds.  4G LTE is used to specifically call out LTE. This technology supersedes both GSM/WCDMA/UMTS/HSPA and CDMA/EV-DO/WiMAX

4G Calling (also known as VoLTE, or Voice Over LTE) allows you to continue using data at faster speeds during a call without slowing down your internet connection. This service is unavailable in Lebanon.

4G (LTE) doesn’t support voice calls in the simplest implementation, it is only a data transfer system; your phone has to swap to a 2G or 3G network to make a voice call using a technical process called “Circuit Switched Fallback’” (or CSFB).

Difference between LTE and VoLTE: 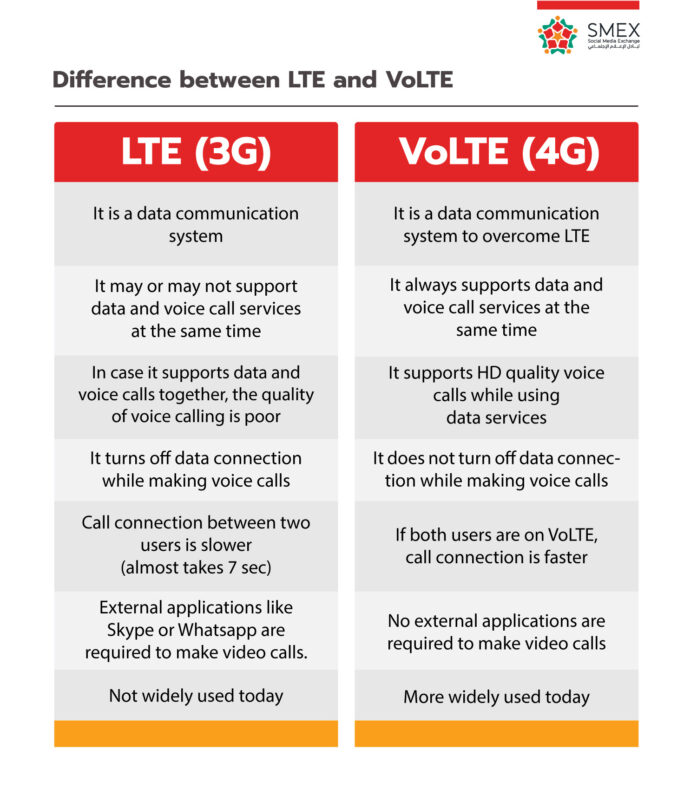 A strained network and unaffordable prices

Although the maintenance of the 2G network is in fact simple and less expensive, the government decided to outrule it under the pretext that it’s costly to maintain. According to the decree, the savings from shutting down Alfa’s 2G network will be around $7.452 million per year, compared to only $150,000 for touch.

Shutting down the 2G network will affect mobile holders living in rural areas in Lebanon, where coverage is already very weak and newer phones are unaffordable to most. For the rest of the country, discontinuing the 2G and the majority of the 3G networks, will strain the 4G network, making calls and cellular data much slower and less efficient.

The financial crisis in Lebanon, made worse by hyperinflation, is already straining people economically. More than 80% of the country’s residents do not have access to basic rights, including health, education, and utility services. The public sector employs around 300,000 people, the majority of whom work in the military sector with an average salary of around $60 per month. The approval of these two decisions completely excludes hundreds of thousands who will not be able to afford neither new 4G phones, nor the spiked up prices for calls and data bundles.

We call on the Ministry of Communications to reconsider shutting off the 2G network, and to find solutions that guarantee the rights of mobile users instead. We need a clear plan to operate the network and reduce expenses and inflated costs. At the same time, the ministry must tackle sources of corruption and wasteful management in both the telecom operators and the ministry itself.

Ragheb Ghandour is a cybersecurity consultant. He primarily focuses on cybersecurity risks as well as the rights to online free expression and privacy.