The Lebanese government has just approved two disastrous decisions, proposed by the Minister of Communications, Johnny Corm, that will further burden hundreds of thousands of mobile holders. The first is to raise telecom prices to Sayrafa rates, which would triple or quadruple the current prices, making it roughly 1/6th the minimum wage, while the second entails completely terminating  the 2G network, and parts of the 3G network, to cut costs amid “the imminent collapse of the telecommunications sector.”

Corm claims that this would prevent “squandering resources.” The Ministry of Telecommunications and the government had ample time to reduce exaggerated expenses and costs, implement governance in job recruiting, and seek alternative solutions, such as “National Roaming,” but none of these measures were taken, and instead, network subscribers now have to pay the price for their inaction.

In a statement issued on Thursday, May 19, Corm said that he had prepared a draft decree for the tariff of internet and cellular services. He warned that he would hold the Council of Ministers responsible for the network’s collapse if the decree is not approved.

Switching off 2G network for 230,000 subscribers 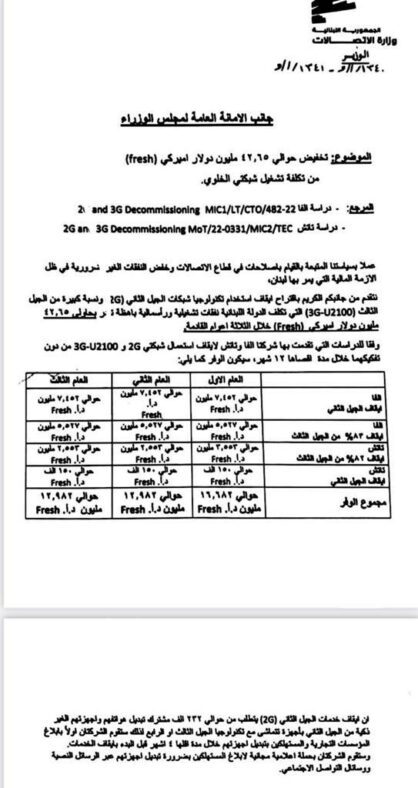 The minister’s decision to terminate the 2G network would leave more than 230,000 subscribers without access to mobile services, since many will have to upgrade to new devices. Paradoxically, most people who own the old generation devices would not be able to afford the upgrade. Buying new devices will become more difficult considering the expected price rise in 3G-compatible phones due to increased demand.

The minister did not clarify how switching off 2G networks will save energy, especially since a private company already handles the operations of supplying fuel to transmission stations and towers, charging a lump sum in return. Corm’s move remains unclear.

Additionally, turning off the 2G network will prevent communications between the devices of security forces which operate on quad lines. Transferring these to the 3G network is a costly project, costing up to $10 million; an amount that could be invested in improving the network instead of halting it.

According to an expert in the field of telecommunications, turning off the 2G network will decrease the rate of phone calls, as well as the rates of call drops and call attempts, to become worse than they are now.

The above complications would further weaken the mobile communications networks in Lebanon rather than keep them running. Considering this, the expert poses an important question: “Is the proposed decree meant to deliberately worsen the network so it can be later sold for cheap? If not, then why has the minister failed to resort to more effective alternatives?”

A fivefold increase in mobile tariffs
The second decision to raise tariff prices amid a historic economic crisis will be costly for almost every phone holder in Lebanon. Starting July 1, the two telecom operators in Lebanon, Alfa and touch, will begin charging people at the fluctuating Sayrafa rate (23,900LL at the time of the decision) instead of the old exchange rate pegged at 1500 LL to the dollar.

Corm’s proposal came in response to the two private companies’ pleas to raise tariffs “to ensure the continuity of the sector.” Combined revenues of Alfa and touch have plummeted from US$1.4 billion in 2018 to US$75 million in 2022 as a result of the deterioration of the Lebanese lira and the economic crisis.

Contrary to constant appeals to reduce costs and expenses as well as fight corruption, an ICT expert told SMEX that the minister “promoted between 200 and 300 employees in the two mobile services companies [Alfa and touch] just ahead of the elections.” Such a miscalculated decision made in the last Cabinet meeting before entering caretaker status indicates that it was deliberately postponed until after the elections for political reasons.

Alternatives to raising prices
One of the available alternatives to raising prices is the “Single Ran” technology which “touch” acquired  from Huawei a few years ago for huge sums amounting to $90 million, according to the Audit Bureau report. A source at SMEX pointed out that “these deals benefited the ministers and mobile users, however, isn’t now the perfect time to take advantage of them?”

Although Alfa, the second network operator in the country, does not have Single Ran technology, it can still benefit from activating a National Roaming service that allows the two companies to mutually benefit from their networks.

The technical expert told SMEX that activating the “National Roaming” service will facilitate the transition from second to third generations, and will also enable the cellular companies Alfa and touch to improve their coverage. This contradicts the minister’s claim that “National Roaming” will reduce competition.

Why is Minister Corm proposing to turn off a large part of the network and raise prices instead of negotiating some questionable contracts in these two companies? For instance, Alfa’s network maintenance contract amounts to around $12 million per year. “Why is the minister not reviewing these contracts and negotiating with other parties to reduce the inflated prices? And why is he not scrutinizing fictitious employment schemes in the telecom companies?” the source concludes.

We call on the Minister of Communications, Johnny Corm, and the minister who will succeed him, to reconsider shutting off the 2G network, and to find solutions that guarantee the rights of mobile users instead. We need a clear plan to operate the network and reduce expenses and inflated costs. At the same time, the ministry of telecommunications must review existing deals for sources of corruption and wasteful management.