Lebanon: It’s time to turn your international position on privacy into action at the national level 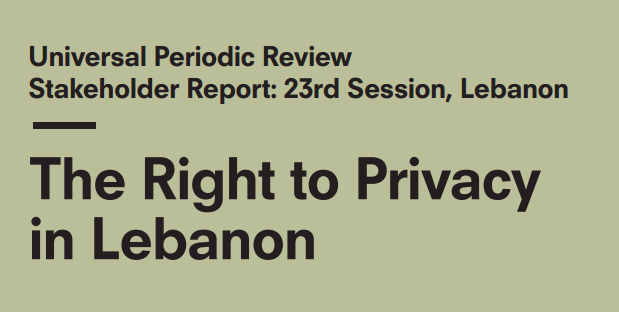 Once seen as more liberal than its Middle Eastern neighbours, Lebanon has recently been the subject of troubling reports on attacks and threats against the right to privacy.

These include the Cybercrime and Intellectual Property Rights Bureau’s expansive monitoring, investigative powers oppressing online privacy and freedom of expression of Lebanese citizens, the lack of judicial authorisation and administrative oversight of surveillance conducted by the Internal Security Forces and increasing restrictions on journalists and activists, particularly in terms of their online engagement.

Lebanon is currently failing to constitutionally uphold the right to privacy, to enforce a legal framework to protect personal data and to ensure that laws, regulations, activities, powers, policies and practices related to communications surveillance adhere to international human rights law and standards.

The Social Media Exchange (SMEX), a registered Lebanese nonprofit that conducts training, research, and advocacy on strategic communications and human rights in the digital era, collaborated with the Association for Progressive Communication (APC), to submit a joint stakeholder report.

The report raises shared concerns about the respect, protection and promotion of the right to privacy in Lebanon before the Human Rights Council for consideration in Lebanon’s up-coming review at the 23rd session of Universal Period Review in early 2016.

During the first cycle of the Universal Period Review of Lebanon in 2010, the issue of the right to privacy remained undiscussed, but given the concerning reports that have emerged recently, it is crucial that the Human Rights Council request further information and commitment from Lebanon to address reported unlawful interferences with and violations of the right to privacy. The main issues raised in the joint submission include:

Communication surveillance
Whilst the Law No. 140 seems to provide the necessary safeguards, in practice systematic failures to abide by the law are directly threatening the right to privacy of Lebanon’s citizens. Main concerns expresed in the UPR submission included:

Data protection
Lebanon does not have a law regulating the protection of personal data. With existing and emerging initiatives includingthe unique ID number e-government initiative, the impending deployment of biometric passports,and the E-transaction bill which, in its current state, would allow for warrantless search and seizure of financial, managerial, and electronic files, including hard drives, computers, etc., and the establishment of the Electronic Signature & Services Authority, a new regulatory and licensing body with practically unchecked powers, it is extremely concerning that Lebanon has yet to adopt strong legislation protecting data privacy.

Recommendations
In view of the aforementioned areas of concerns, SMEX and APC submitted the following recommendations for the adoption by the UN Permanent Delegations who will intervene during the official review of Lebanon:

From words to action
For the first time at the at the 21st session of the UPR earlier in 2015, some states were challenged over their surveillance practices and their lack of protection for their right to privacy, including Kenya, Sweden and Turkey.

Given Lebanon’s commitment to protecting the right to privacy at the United Nations, we hope its UPR will provide it an opportunity to apply what it preaches in Geneva to its national context by ensuring the privacy of its citizens are protected from unlawful, disproportionate and unnecessary interference by the Lebanese government but also other state as well as the private sector.

This blog post was originally published by Alexandrin Pirlot de Corbion, the 26th May of 2015 on Privacy International.