It’s a wrap! 4 key takeaways from the first Bread&Net 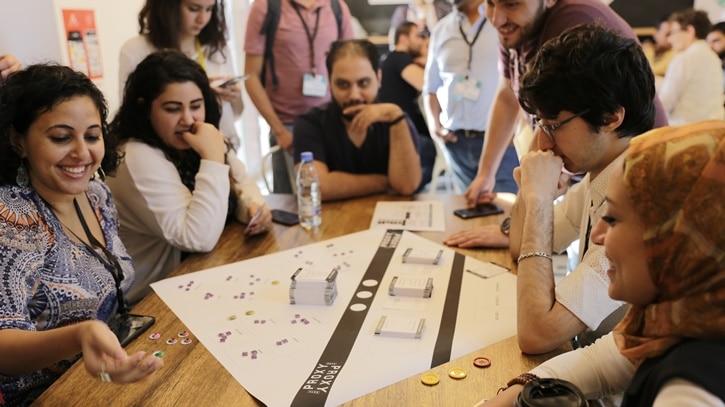 On November 20 and 21, around 200 people from over 20 countries gathered together in Beirut for 35 panels, talks, and workshops at Bread&Net, the region’s digital rights unconference. Hosted by SMEX and organized collaboratively with supporters and partners, Bread&Net created an offline space for discussion about technology and society, in a casual yet safe environment supported by the event’s code of conduct.

A regional discussion
With almost all sessions in Arabic, and attendees coming from across the MENA region, Bread&Net was firmly rooted in the pressing issues faced by communities in the region. People joined Bread&Net from over 20 countries. We’re also delighted that more than 50% of attendees identified as women, and that we had an even gender ratio among speakers and session hosts.

Beyond the core two-day unconference, there were additional events such as a documentary screening of “The Cleaners” followed by an engaging discussion on social media platform content moderation. On the day before Bread&Net, partners 7iber and the Arab Digital Expression Foundation (ADEF) led an Editathon to launch the creation of an Arabic technical language glossary.

Technology and society have become inextricably linked, and there’s no going back — so what kind of (digital) future do we want? In consideration of this question, here are some key takeaways from Bread&Net 2018 that we’d like to share:

Digital laws and policies matter, but the MENA region lags behind
During one of the opening panels on Day 1 of Bread&Net, ‘How to resist harsh cyber security laws,’ Lebanese Judge Hania El Helweh said, “freedom of expression is sacred… there needs to be a distinction between criticism and insult.” Yet existing and forthcoming laws were critiqued during the panel: for instance, Jordanian lawyer Omar Atout stated that the cybercrimes draft law in Jordan is “at odds with international conventions and best practices.”

The application of legal frameworks also needs attention: Egyptian attorney Hassan Al Azhari highlighted that for cybercrime cases in Egypt, there is often pretrial detention without any reason being given. In the session ‘Tripartite aggression on online freedom in Palestine,’ 7amleh reported that in 2015-16, 400 people were arrested, of which 200 were ultimately charged, under the pretext of “inciting violence and terrorism” for content they had written and shared online.

Corporations need to step up in shaping rights-based digital policy in the region
Given violations by some governments against online freedom of expression, corporations need to step up in shaping policy in the MENA region, and not be complicit in shrinking civic space. For instance, only 4 out of 66 mobile operators in the Arab region make both their Terms of Services and Privacy Policy publically available, according to research by SMEX.

In a session entitled ‘How to involve corporate actors in protecting and promoting human rights online,’ Eman Jaradat from the Jordan Open Source Association (JOSA) pointed out that governments in our region also “tend to to protect corporations more than citizens; in addition to not protecting users’ data as they should, they are banning VOIP services to earn more money and to fight criminal activity, without any consideration for user rights.”

In another session, ‘Demanding more from companies: content moderation and what we can do,’ panelists and audience members called on global technology giants like Facebook and Twitter to listen to regional voices and their regional policy experts in their decision making, rather than governments. While global and regional technology companies and mobile operators were invited, only a few were present at Bread&Net, notably Twitter. We hope more can join us next year and be part of the discussion!

Wikis are BIG in MENA!
One surprising takeaway from Bread&Net was the popularity of wikis in the Arab region. A wiki is a server program based on collaborative trust, as it allows multiple users to collaborate in creating and editing web content.

There’s a strong commitment to wikis in the region: the WikiGender project; the Arabic technical language glossary created during the editathon; and community owned cartography on OpenStreetMap in Palestine; as well as Wikimedia Foundation projects like Wikimonuments and Wikidata. Wikis also led to the most heated debate of the the conference, during the session ‘To Wikipedia or not to Wikipedia?’ A long-time member of the Arabic Wikipedia community said that, “the community was not welcoming and there were different ideologies at play.” Attendees of this session raised the question: “whose voice is heard on Arabic Wikipedia — does self-moderation work in our region?”

Online networks offer greater freedoms, but also heightened risks, especially for some communities.
At Bread&Net, LGBTIQ, feminist, and migrant worker organizers explored how online tools offered new means of collaboration and organizing in the civic space, but also led to new privacy concerns, new modes of harassment, and greater risk of surveillance. For instance, in the discussion “ Hate speech & privacy threats to the LGBTIQ community,” we learned that after a general crackdown on the LGBTIQ community in Egypt following a concert by Lebanese band Mashrou3 Leila, authorities used catfishing tactics on the dating app Grindr to identify LGBTIQ-identifying individuals.

Furthermore, in countries where homosexuality is illegal, how can a member of the LGBTIQ community safely report online harassment? On a more positive note, we also learned about how mapping technologies can be used as a tool to document and advocate against harassment.
This is just the beginning! Thank you to everyone who came and made Bread&Net such a huge success. A special thank you to the Advisory Committee and our partners.

We hope to see more regional voices at global conferences like the Internet Freedom Festival (IFF) in Valencia and RightsCon in Tunis. Stay tuned for Bread&Net 2.0!

Sacha Robehmed is a researcher and writer based in Beirut.