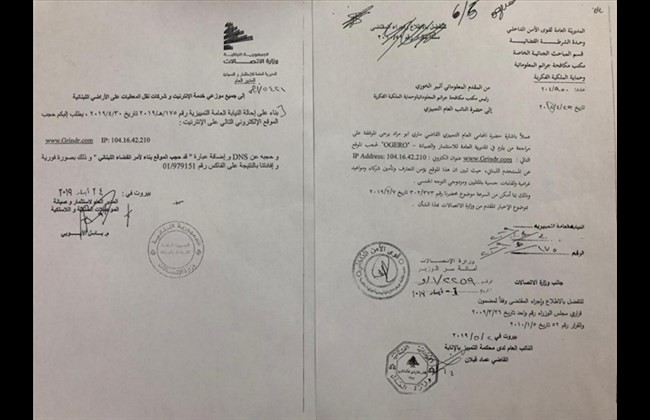 A few weeks ago Ogero, the ministry of telecommunications operated internet service provider (ISP), blocked Grindr, a popular gay online dating application, due to a court order from the general disciplinary judge Marie Abou Mourad, which stated that the application “secures romantic and sexual liaisons for homosexuals and bisexuals.”

The most recent court order comes a few months after Touch and Alfa blocked Grindr on 3G and 4G networks as the result of an administrative decision taken by Telecommunications Minister Jamal Al-Jarrah, who acted at the behest of one of the security agencies.

After contacting Ogero to ask for the blocked websites list, Imad Kreidieh, the chairman director general of Ogero, responded to a Twitter thread, stating Ogero only bans websites based on judicial orders. Kreidieh also mentioned that the ministry of telecommunications (MoT) maintains a list of blocked websites, but does not publish them.  However, when we reached out the Ministry of Telecommunications requesting the list, they responded that they cannot provide this list to the public

We demand that Ogero and the MoT respect human rights and freedom of speech in Lebanon by providing a full list of the blocked websites in Lebanon and the accompanying court orders. Moreover, blocking access to Grindr discriminates against many citizens in Lebanon who have the right to express themselves and communicate freely.The continued blocking of Grindr highlights one of the major issues with the government’s monopoly over communications in Lebanon. When the court makes discriminatory decisions, the telcos and ISPs just roll over.

Meanwhile, we recommend that Grindr users who still wish to access the application adopt circumvention tools, such as Orbot and Psiphon Pro, or install VPNs.

SMEX is a registered Lebanese NGO that works to advance self-regulating information societies in the Middle East and North Africa.
Dear Careem, Stop Sharing Riders’ Personal Information with Drivers
Save the Date: Bread&Net is back! 15 to 17 November 2019