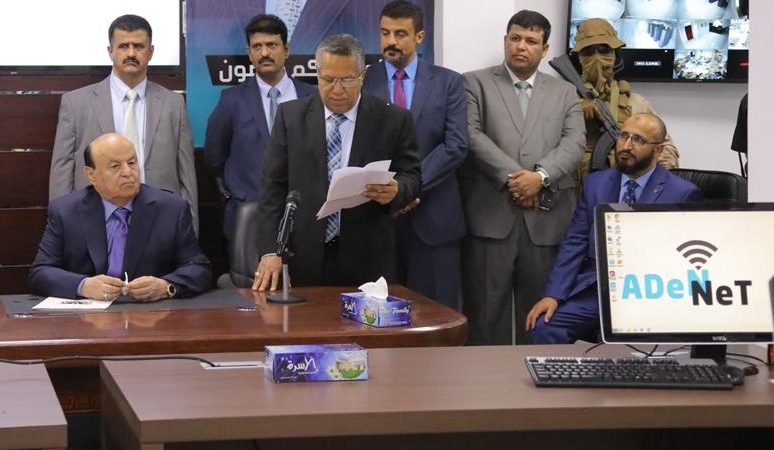 Feature image via AdenNet:AdenNet says that it will provide larger, faster and cheaper internet. But what about digital rights and freedom?

Yemen’s internet has become increasingly unstable due to the war and the country’s fragmentation. Indeed, the country has witnessed frequent internet shutdowns and interruptions and the warring parties have blocked many websites, violating Yemenis’ rights to freedom of expression and access to information and threatening the already fragile state of press freedom.

Until recently, Yemen Net, a government-held company in Sanaa currently controlled by the Houthis, was the only internet service provider (ISP) in Yemen. However, the government of President Abed Rabbo Mansour Hadi, backed by the Saudi coalition, just launched a new Aden-based ISP, aptly named Aden Net. Will the status of communication and digital liberties improve in Yemen or will Aden Net also throttle the network, block access to information, and restrict freedom of speech?

Yemenis currently use Yemen Net, which the Public Telecommunications Corporation (PTC) of the Yemeni Ministry of Communications established as the sole ISP in the country before the start of the war. After falling into Houthi control, Yemen Net continued to provide Internet services in various Yemeni territories despite the war, but the unrest prevented the company from maintaining or developing reliable DSL, as the demand for internet increased.

“Despite the division in the country, PTC employees continue to work and receive their salaries because the Sana’a government [loyal to the Houthis], wants to continue reaping the financial returns generated by the telecommunications sector,” Fahmi Albaheth, a researcher at Internet Society Yemen, told SMEX.

Albaheth also pointed out that “the Internet in Yemen is still old and subscription is costly for citizens, and this is not commensurate with the increase in the number of subscribers who want to follow the news through websites or social media.” He added that “wired and wireless Internet is getting slower in crowded cities, and if someone wants to subscribe to a new Internet, they are not be able to because the network can’t handle the traffic.”

Because wired Internet does not reach remote and rural areas, private companies have established networks that access the Internet through official subscriptions from Yemen Net and then reach the remote areas using antennas. Then, they then sell this service to citizens, according to Albaheth. Companies that need high-speed Internet, such as banks, are “using the Internet via satellite [or subscriptions from YemenNet] at very high cost,” Albaheth added.

New company, new concerns
Aden Net says on its website that it offers high-speed, fiber-optic internet to government entities, institutions, and banks, and 4G wireless internet for individuals, both at lower prices than Yemen Net. However, like Yemen Net, it has not posted any privacy policy or terms of service on its website, raising questions about blocking content as well as user rights.

Web filtering is a common phenomenon to Yemen; Yemen Net already shut down the internet in late 2017 and blocked news sites and social networking platforms like Facebook, Twitter and Telegram, according to activists. “This has been happening for some time,” said Albaheth. “My personal blog has been blocked since 2015, and the company does not inform users when the internet is disconnected and does not even tell them what happened after it’s back,” he added. The new company’s behavior does not seem to be much different. “It was due to launch on July 30, but its release date was delayed without any explanation,” Albaheth said.

The UAE-backed Aden Net is set to transmit internet from Saudi Arabia and will not depend on the existing submarine cables in Aden, according to a report form Oracle, the U.S-based software company. Aden Net’s association with the UAE and Saudi Arabia raises question marks about content censorship and digital freedoms, especially since both countries use Canadian technology to block websites of various news organizations, opposition websites, major international news sites, human rights sites, and internet circumvention tools.

In addition, authorities in both Saudi Arabia and the UAE are increasingly cracking down on online activists. Since May, the Saudi authorities started arresting activists and human rights advocates, most of whom are women advocating for women’s rights, including the right to drive, which became legal this year. Amnesty International also announced in June that one of its employees, as well as a Saudi resident abroad, had received a WhatsApp message with misleading content concerning Saudi Arabia, “carrying links Amnesty International believes are used to distribute and deploy sophisticated mobile spyware .”

Ahmed Mansour, a human rights activist, was targeted twice through spying software before being arrested 10 years in prison and a fine of 1 million dirhams ($ 270,000) for his social media advocacy for human rights and his calls to of activists in the UAE. One of those activists included Dr. Mohammed Al-Roken, who was arrested before Mansour and also sentenced to ten years’ imprisonment.

British daily The Independent reported in early May that the Emirati government had taken over Yemen’s Socotra island to build a military base and a telecommunications network. Another article published on a Houthi-linked last month indicated that Aden Net is also linked to the UAE and aims to “divide national institutions and spy on users and censor certain content by linking the network to their region.”

“At the moment, President Hadi’s government will not interrupt the Internet coming from Sana’a because Aden Net does not cover many cities, it doesn’t even cover the entire city of Aden,” Albaheth said. Thus, “two competing options will be available: DSL subscriptions from YemenNet, and in many areas, wireless Internet subscriptions that AdenNet says are larger, faster and cheaper.”

“The telecommunications minister assured us that Aden Net will not block any site other than pornographic websites that are incompatible with Yemen’s religious and social customs and traditions,” he added.
Regardless of present political issues, the two companies should make their privacy policy and terms of service available and commit to protecting the rights of users to communicate and express themselves on the Internet.

Who will really pay for the Ministry of Telecommunications’ decision to prevent smuggling mobiles?
Mobile internet speeds up the Arab countries, but fixed broadband lags behind