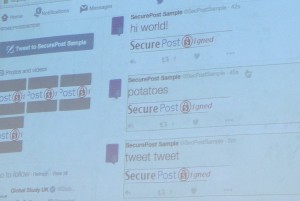 Feature image: Twitter users with the Chrome extension will be informed that a post is authenticated through a green frame (2nd and 3rd tweets).

For many of us, being identified on social media or giving a close friend our account password is no big deal. However, for activists, peaceful protestors, journalists, and minority groups, the matter is much more sensitive.

That is precisely why “SecurePost”, an android app and Chrome extension, was developed. Dr. Lisa Parks, Professor of Film & Media Studies at the University of California, Santa Barbara (UCSB), and Lisa Han, Master’s in Media Studies student at UCSB, visited the American University of Beirut on January 14 and 15, in order to offer 4 workshops on how exactly all this works.

Effectively, any user can download the app to their android phone, set it up with a password unique to them, and then use it as an interface to Twitter or Facebook. This interface allows one “superuser”, a.k.a. the owner of the original social media account, to invite other members to a group by exchanging QR codes (via an app called “Barcode Scanner”) or secret keys. Members can then post to the account, without the superuser having to give away the password, hence maintaining control over their account.

Once a member posts through the app, their post appears with an encrypted image, showing that the content is authentic, i.e. has been posted by a member of the group, rather than, say, a hacker. The app also allows for anonymity (if the group members can keep a secret, that is), which can come in handy if the posts might get their author(s) into trouble.

Overall, the app adds an extra layer of security to social media, which is clearly becoming our main method of communication. It is available to download and use, but still has a lot of issues to be worked out. For example, the encrypted image is not that secure, since anyone can download it and fake the authentication. The app also only works on the mentioned platforms and for the moment, users can only be members of one group at a time, making it less than practical. However, the need for such an app is not difficult to understand. In fact, this type of app is an essential tool to make sure that individuals or groups who are threatened can still exercise their freedom of speech.

For updates on the app and extension, click here.