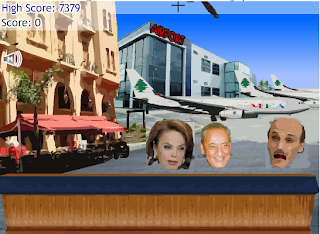 I played Whack-A-Politician on Facebook, thumped a few Lebanese politicians with a judge’s gavel and managed to—quoting the game: “say no to useless talk and speeches of hatred and war”. The game also asks you to “Use your mouse and click to silence a politician before another citizen leaves Lebanon.”

A non-political, non-religious NGO working on promoting a culture of appreciation and acceptance of diversity in Lebanon, Youth for Tolerance created this free online game and a few others. “M3a-Mwe” is another one that helps free the citizen sheep by ridding them from colors representative of political affiliations and turning them white again.

YFT is using traditional media as well. They’re working with students and new graduates from the audio-visual field on a campaign that includes a series of TV spots, a documentary, and a helpful guide on conflict resolution.

It’s good to know that non-profits are incorporating innovative methods offered by the progressive Web with conventional forms of media to send a message reinforcing speech free from the spiteful pangs of sectarianism and blind allegiance.

What’s also good to know is how angry people are with our politicians; the highest scorer of the latter game amassed 4,673,096 points while I managed to accumulate a total of 7379! Call me peaceful.