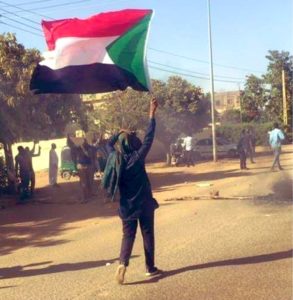 Following the massacre of peaceful protesters at a sit-in near the Army Headquarters in Khartoum on June 2nd, Sudan’s Transitional Military Council (TMC) began restricting internet connectivity throughout the country. By June 4th, the country’s internet connection was completely shutdown. Despite this, protesters called for full civil disobedience on Sunday, June 9th.

The disruption of communications not only violates the fundamental human rights of freedom of assembly, access to information, and freedom of speech, but also contravenes U.N. resolution A/HRC/32/L.20. Without the ability to reach large groups, the citizens cannot organize or develop collective protection plans. This situation has also increased the risk of violence by militias, who are looting shops at random and intimidating citizens to stay at home. As a result, the capital has become a ghost city.

The blackout also creates ideal conditions for the state to spread propaganda, which has included smear campaigns against the peaceful protesters, vilifying them and making them more vulnerable to attacks by radical agents. The blackout has also rendered victims voiceless, leaving them with no means to report incidents or warn others. Two days before the massacre, the junta also closed down Al-Jazeera’s Khartoum bureau which was streaming an around the clock live-feed from the sit-in. In hindsight, these developments seem planned and the junta wanted to take all the necessary precautions before totally isolating the Sudanese population and crushing the uprising. Judging from the horrifying stories coming out of Sudan since the massacre, we fear that the TMC has shutdown the internet to cover up human rights violations and unspeakable atrocities.

In the early hours of Monday, June 2nd, the beating heart of the revolution around the Army headquarters in Khartoum was met with carnage. The Rapid Support Forces, a paramilitary force made up of the former Janjaweed, raided the sit-in camps, killing at least 100. Later, more than 40 bodies were retrieved from the Nile river, and more bodies are turning up along the river banks. The exact number of those killed is still unknown. Women and men alike, were raped, beaten, and shot. Similar atrocities were committed in several major cities in Sudan. To say the least, these developments are devastating.

Since that horrific day, Sudan has been under siege, with militias roaming the city, looting shops, and terrorizing citizens. Only a few hours after the massacre, the government partially disrupted internet connectivity, focusing at first only on specific mobile providers. Over the next two days, the government disrupted connectivity on mobile networks Zain, MTN, and Canar. By June 6th, the government had restricted the flow of information across all providers, cutting access to the internet for the majority of the population. Phone call quality is reportedly poor with callers complaining that the calls have background noises or echoes. Many activists also fear that the National Intelligence Security Services (NISS) is intercepting calls and may be targeting mobilizers.

Social media served as the hub of the revolution. The Sudanese Professional Association (SPA), which became one of the only trusted sources about the turbulent political negotiations between the Forces of the Declaration of Freedom and Change (FFC) and the Transitional Military Council (TMC), utilized social media to streamline mobilization efforts throughout the revolution. Sudanese protesters on the ground used social media, such as WhatsApp, to organize neighborhood committees, address needs, and report human rights violations (which would sometimes go viral within minutes). Sudanese in the Diaspora also benefited from social media, as they were able to raise funds for humanitarian and medical needs in coordination with the activists on the ground. One campaign, for instance, managed to raise $238,889, which originally covered the medical treatment of injured protesters. Those same funds are now being used to purchase essential products for the Sudanese, who embarked on an open civil disobedience campaign on June 9th. Sudanese activists have also become more sophisticated in their digital activism, utilizing Signal to create large podcasts as means of creating communication networks for medicine and for the dissemination of photos from other protests around the country. One such channel has more than 65,000 members. Women-only groups on Facebook have been one of the revolution’s unofficial intelligence arms, identifying security forces and warning the protesters in advance. The whole revolution was orchestrated, organized, and harmonized through online networks that connected a myriad of offline entities; like a Beehive, everyone had a role.

Social media was the backbone of the nonviolent movement, providing global exposure to the revolution and letting the government know that the world was watching. Now, without access to the internet and social media, a shroud has been cast over the country, and the government has full control to commit its crimes in the dark. The shutdown of human rights networks across the country is dire as many cities outside the center may be subject to more brutal attacks with little coverage or documentation.

Due to the internet shutdown, the revolution is facing a few major challenges:

For all the reasons above, we call on all human rights defenders working on digital rights to lend their support for Sudanese people who are currently on lockdown.

Tags: #KeepItOn, Human Rights, Internet access, Internet Shutdown, Sudan, violtions
Share This
Save the Date: Bread&Net is back! 15 to 17 November 2019
Social Responsibility Is A Business Matter: A Guide For Tech SMEs In Lebanon