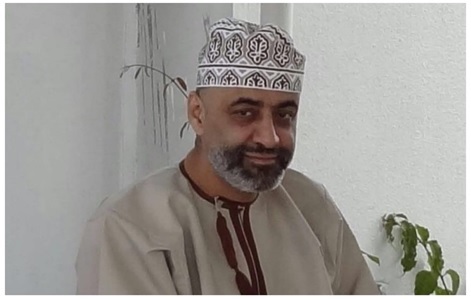 Social media activists are mourning the death of Hassan al-Basham, an Omani activist who died in Oman’s Samail Central Prison on April 28 after his health deteriorated.

Al-Basham “defended prisoners of conscience…and carried out activities on the social in humanitarian levels,” according to a statement by the Omani Coalition for Human Rights, confirming the news of al-Basham’s death.

Al-Basham was arrested for a few days in September 2015, then again on February 8, 2016, after which he was sentenced to three years in prison, charged with offending the sultan (a charge that was later dropped), violating religious values, and other crimes.

A legal researcher informed SMEX that the violation of religious values charge is based on article 19 of Oman’s cybercrimes law, which states: “The penalty of imprisonment for a period not less than one month and not exceeding three years and a fine not less than OMR 1,000 and not exceeding OMR 3,000 shall be applied to any person who uses the informational network or the information technology facilities to produce,publish, distribute, purchase, or possess material that might prejudice the public order or religious values.”

The statement by the Omani Coalition for Human Rights said that al-Basham’s trial went through a lot of back and forth. The Court of Appeal in Sohar sentenced him to three years in prison on 13 June 2016. This action was revoked by the High Court on 17 January 2017, because of al-Basham’s deteriorating health. According to the coalition, the Sohar Court of Appeal “did not allow the defense team to present its evidence and medical reports,” but still upheld the initial verdict of three years in prison on 19 November 2017.

The coalition called on the Omani authorities to immediately open an independent investigation into the death of al-Basham, guarantee that they will treat all prisoners of conscience according to the UN Standard Minimum Rules for the Treatment of Prisoners, and ensure that human rights defenders in Oman will be able to do their legitimate work without fear of reprisals.