OpenStreetMap is an international project that aims to provide free geographic data collected by individuals from around the world. Or, as they describe themselves on their website, OpenStreetMap is a free editable map of the whole world. OpenStreetMap relies on crowdsourcing to gather the geographic data that is plotted on the map. Anyone who knows how to collect and upload data to the site can help. Participants use either GPS or satellite/aerial images to outline the shape of the streets. Street details are then added either with GPS tracklogs, photos, audio/video recordings, Walking papers or simply handdrawn maps. And finally mappers colorize and add buildings to the map.
On Saturday, the 29th of August, Open Street Map Lebanon and Social Media Exchange will organize Lebanon’s first Mapping Party in downtown Beirut. Mapping parties are social events, organized by experienced mappers, where a group of enthusiasts, often armed with GPS devices and printed maps, get together to collect data about a particular area. Uploading geographic information takes some technical and internet literacy. But the knowledge needed is accessible to anyone through OpenStreetMap’s wiki, beginner’s guide, and a more advanced guide. Another way that OpenStreetMappers encourage beginners to participate is by hosting a mapping party, like the one SMEX and OSM Lebanon are planning for August 29.
So far, OpenStreetMap’s efforts have resulted in the full mapping of the Netherlands, for example, and other places like Germany or Bellarussia being extensively mapped. But the greatest achievement is that these maps are available free of cost to anyone in the world, under a Creative Commons License. ITO World, a UK company that focuses on transportation, recently produced an animation to visualize the result of this mapping buzz around the world:

OSM 2008: A Year of Edits from ItoWorld on Vimeo.
In Lebanon, a core team of mappers have been consistently working to gather and upload geographic data about Lebanon. Mapping has also been used in recent initiatives, including Sharek961.org, which monitored the latest parliamentary elections with a build of the Ushahidi crisis mapping platform.
Still, there is a lot to be done. And gathering data in Lebanon can be a challenge, given the sometimes overzealous security environment, in which GPS devices have aroused the suspicions of body guards and army personnel. 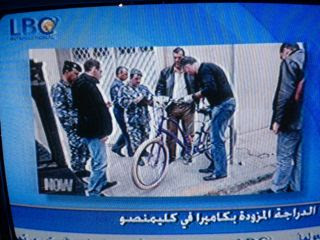 A bike equipped with a GPS-enabled phone was the subject of scrutiny near politician Walid Jumbatt’s home last year.

But thanks to innovations like Walking Papers, meant to help low-tech users get involved, mapping can be done on the down-low—even in high-profile areas like downtown Beirut. We’ll give it a try on the 29th and hope you’ll join us.