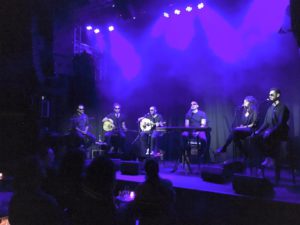 On May 11, SMEX and Lebanese band Al-Rahel Al-Kabir (The Great Departed) launched a petition demanding that iTunes Middle East release a public explanation for its refusal to upload five of the band’s songs, which mock religious fundamentalism, political oppression, military rule and other afflictions in the Middle East.

The music giant contacted the band two days later and yielded to the petition, informing them Qanawat, a UAE-based intermediary, was responsible and pledging to work with another content aggregator to upload the band’s songs.

Initially, the band wrote in a Facebook post that iTunes’ Middle East platform had refused to upload the songs “Mawlid Sayyidi al-Baghdadi (Saint Baghdadi’s Birthday Celebration),” “Janna al-Shaabu” (The People Went Crazy),” “Do Not Mix,” “Khitab Muhim (An Important Speech),” and “Ummt Tlaat Maa al-Nas (I Marched With The People)” because it deemed them “inappropriate for the Arab world.”

In response, SMEX and The Great Departed organized a petition on Change.org, calling on iTunes to provide a public explanation for this action and increased transparency regarding content takedowns in general.

Over two days, the petition garnered over 400 signatures and gained attention from local activists, musicians, and journalists. As the petition continued to be shared, iTunes contacted the band and called Qanawat’s decision “unacceptable and intolerable.” Additionally, it promised to use another intermediary service to upload the band’s songs to iTunes Middle East.

A representative from iTunes explained that Qanawat, the content aggregator, had prevented the songs from being uploaded and an anonymous source told The Daily Star that iTunes did not know about Qanawat’s decision, which it made due to “local sensitivities.”  Following this exchange, SMEX and The Great Departed agreed to end the campaign.

Rare are the victories when it comes to freedom of expression, online or offline, in the Arab world, so SMEX is grateful to all supporters for exerting enough pressure on iTunes Middle East to promise action in response to Qanawat’s decision. If anything, this petition has shown us that there is room for to demand transparency from corporations in the region; however, as long as these corporations continue to work with aggregators that willingly censor content, such threats to online freedom of expression will persist.