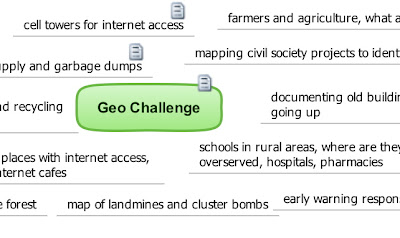 Last Tuesday (apologies for the late post), several of us met at the RootSpace to discuss how we might use mapping to strengthen civil society in Lebanon. The exercise was inspired by the announcement of Google’s Geo Challenge, which invites submissions until December 22, 2008, for online mapping ideas in one of five core areas:

After discussing these areas briefly, we started brainstorming how online mapping and GPS could be applied in Lebanon. Mostly broad ideas emerged, and they included:

We originally thought that some meeting participants might break into smaller groups and begin sketching out their applications, but that wasn’t quite the way things worked. Instead, we talked a lot about how to identify available data and how to access it.

One approach that was suggested was to find out which data was available and then try to tailor an online mapping project from that. Others thought that identifying the project first, then trying to track down relevant data and adjusting goals based on what was found, or developing plans to fill the holes, would be a logical approach. Probably, in Lebanon, where data isn’t always readily available (but, it was suggested, the ministries and UNDP might be good places to start), we’d need some hybrid of both.

While our initial idea in convening the meeting was to bring people together who had like ideas, our low attendance (about eight of us were there) made that more difficult. We’ve run into this problem before. We’re looking for input on how to make such working meetings and social events more attractive. If you have ideas, please post them in the comments below.

Another point that was made was that for organizations to buy in, the mapping really has to be tailored to their already established goals. Point taken and it may be that this is the only way to go, but our idea was to try to use this opportunity and others that emerge in the future as a means for building new partnerships and bridging gaps in civil society. Our hope was to find a mapping solution that would be of use to a majority of, if not all, civil society actors. We know you can’t please everyone, but still we’d like to try to build on and sustain the types of cross-sector connections made during the Social Media Exchange project.

Finally, do you have data that you’d like to see mapped, that could help you be more effective if it were? That might better reveal the problems you’re trying to solve? If so, we encourage you to apply for the Geo Challenge, whether you’re one organization or a consortium of many.

Even if you’re not awarded funds this time, going through the process will help prepare you for other such opportunities, as more and more funding applications will require NGOs and other civil society organizations to incorporate not only a media component but also a social media component.

We’ll be posting them here as we hear about them. So subscribe to our RSS feed so you don’t miss out.