I was walking in the old souks of Saida when I heard the news about Gaza. Every television was tuned to the reports. Today, I received an email to join the Web2Gaza fan page on Facebook, set up by a group (one of whom is our trainer Moustafa Ghaddar) who wants to use Web 2.0 “to end the Gaza Crisis and Stop the israeli war crimes.” There’s also a developing website, initially created to support ending the seige on Gaza. 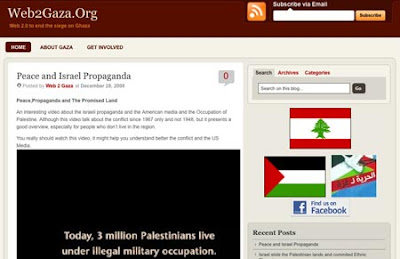 It reminded me of an email I recently received about a documentary I had been meaning to watch about a series on “real life in Gaza.” My editor at MediaShift had forwarded me and a couple of other writers working in the Middle East Jaron Gilinsky’s post about the innovative series, which was produced by Arte TV and airs on the Internet (optimized for high- and low-bandwidth; subtitled in Arabic, Hebrew, English, French, and German).

The documentary consists of 40 short episodes, each of which consists of two videos—one from Gaza and one from Sderot—that air in a split screen.
Can Web 2.0 help the people in Gaza or help to resolve the conflicts that currently engulf the Middle East? I’d like to think so, as long as we pair it with face-to-face interaction, among ourselves and our adversaries. We must not delude ourselves into thinking that we will solve anything from behind a computer screen. What do you think?