Freedom of Expression Regressing in Lebanon, Online and On the Ground 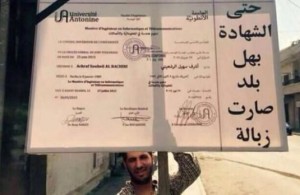 Feature image via Facebook: Student Ashraf al-Rasheeni with a picture of his degree.

Five civil activists have spent their eighth night in detention on ambiguous charges, such as encouraging demonstrations, disturbing the peace, and rioting, and have been placed under the jurisdiction of the military court.

Legal and police repression of freedom of expression on the Internet, and freedom of expression associated with activism in general, is growing. We share with you below some of what has happened over the last three weeks: (this covers the period from October 16, and looking 3 weeks back. Activists spent 10 nights in jail before they were released)

Cases we have observed:
Ashraf al-Rasheeni: The Antonine University’s administration accused him of libel, slander and defamation on account of a placard he held during a demonstration. The placard depicted an enlarged image of the degree he had obtained from said university with the caption: “Even a degree in this country is trash” (Al-Akhbar). The university later withdrew the accusation after Rasheeni apologised.

Michel Dawihi: On Tuesday, October 6 at midnight, Judge Marcel Bassil issued a ruling to release Michel al-Dawihi and have him pay a fine of L.L. 300,000 for defamation and libel. He was acquitted of all other charges and the judge ruled that he had been detained for a sufficient period of time.

He was freed on the morning of Thursday, October 7, following ten days of being detained by the security forces after he had handed himself in to the Tripoli Saray on September 28. Dawihi was being investigated on charges of “inciting sectarian strife”, after he wrote a comment on his personal Facebook page criticising the General Security Office (MaSKeyes).

Khodor Salameh: Blogger and activist Khodor Salameh posted the following on his personal Facebook page: “I was summoned last week to the Cybercrime and Intellectual Property Office over a Facebook post, and incidents like these have been occurring with increasing regularity over recent weeks, sometimes due to complaints from individuals or political figures, artists or others on the basis of statements made on social networking sites.”

Zoulfikar Harakeh: Zoulfikar Harakeh wrote on his personal Facebook page that he had been summoned to the Cybercrime and Intellectual Property Office over his criticism of a song by artist Mohammed Iskander in a video that he had published three weeks ago.

Mohammed Nazzal. The Public Prosecution summoned journalist Mohammed Nazzal on charges of insulting the judiciary two years ago over a comment he had published on his Facebook page criticising its administration. As a result, the presiding criminal judge in Beirut, Judge Ghassan Tanios Al Khoury, sentenced Nazzal in absentia to six months in prison and ordered him to pay a fine of L.L. 1 million (Maharat).

Mohammad Zbib: On the morning of Thursday, October 1, journalist Mohammad Zbib appeared before the Attorney General in Beirut, Judge Imad Qabalan, who is investigating a lawsuit brought forth by the Minister of Interior and Municipalities Nouhad Al-Mashnouk alleging libel, slander and defamation. The case was brought forth following Zbib’s publication of an image of a cheque signed by Al-Mashnouk and issued by Al-Madina Bank in 2002 (SKeyes).

Free Alaa Campaign Takes Social Media by Storm on the First Anniversary of His Imprisonment
How to add a flag to your Facebook profile picture?