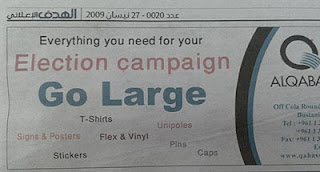 As the Web improves and we begin to realize all that it can make possible in Lebanon, ideas abound for ways to leverage the Internet to transform the so-called situations that bog the country down. Our funder, OTI, and many others have focused their programs on youth empowerment as a best hope for nudging the country away from the ledges it sometimes veers toward. And as youth are the early adopters of Internet applications and technologies in the country, it seems to make sense to explore these tools as agents of change.

But as soon as these ideas find their way into conversations, doubts are raised: Can citizen reporting work in Lebanon? Won’t party loyalists just amplify the messages that are already being sent over the mainstream media channels, drowning out the alternative and independent voices even more? Or worse, entrench already dangerous divisions with online hate speech that could foment violence offline?

The answer: No one really knows.

This year, spurred by the upcoming elections, various organizations and initiatives are thinking hard about how to use the Internet and mobile phones strategically for monitoring and reporting. The hope is that the presence of these technologies might make the elections less susceptible to fraud and corruption, and if that doesn’t always work, at least infractions can be reported, and in a perfect world, prosecuted under the rule of law.

Before we round-up who’s doing what (in a separate post), it’s instructive to take a look at other such initiatives around the world, including the most recent one, Vote Report India, which Gaurav Mishra has been writing about on his blog Guaravonomics over the past few weeks as Indians cast their votes in the Lok Sobha elections.

As any good social media enthusiast should, Mishra looks at the successes as well as the failures and challenges of this implementation of the Ushahidi platform, a mash-up was first developed in response to violence that erupted after the Kenyan elections in December 2007 and was also used by Al Jazeera to report on the Israeli war in Gaza earlier this year.

The biggest success, he says, was the network of partners that emerged as a result of the implementation. The biggest disappointment was that the mainstream media opted not to join in the feedback loop. Read the whole report card to get a sense of the other issues at hand.

So back to Lebanon. What do you think? What would happen with a citizen media reporting apparatus? If citizens could report what they saw at the polls on June 7 by email, mobile, SMS, from anywhere in the country, and send it to the Web, would they use the possibility as a platform for more polarizing rhetoric or would they take a stand against the status quo because they have an opportunity to circumvent the static of the feedback loop?