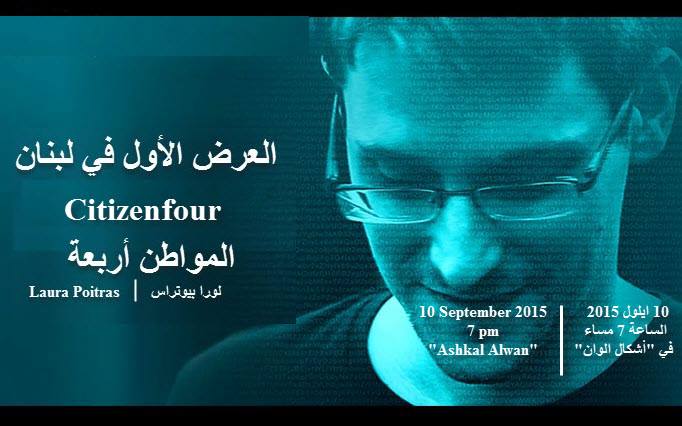 SMEX in collaboration with Ashkal Alwan gladly announce the Lebanese premiere of the documentary “Citizenfour“. The event will be held on September the 10th at 7 pm inAshkal Alwan in Beirut. Watch the movie and discuss with us the implications for internet users in Lebanon and the region. Confirm your attendance on the Facebook Event (if you didn’t do so yet).

About the movie
CITIZENFOUR is a real life thriller, unfolding by the minute, giving audiences unprecedented access to filmmaker Laura Poitras and journalist Glenn Greenwald’s encounters with Edward Snowden, a high-level analyst, in Hong Kong, as he hands over classified documents providing evidence of mass indiscriminate and illegal invasions of privacy by the National Security Agency (NSA).

It is noteworthy that these leaks are considered the largest in the history of the United States, US officials earlier estimated that documents the size of approximately about 1.7 million document, and contributed to such leaks in the bombing of an international controversy expanded continuously to the present day in the national security and counter-terrorism and privacy issues, as well as re-restructuring legislation related to international and regional laws.