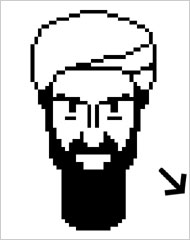 Inevitably in our Web 2.0 seminar, we talk about the fact that technology, like any tool, can be a force for bad as well as a force for good. It basically depends on who’s using it. I always argue that just because technology can be used to make bad things happen doesn’t mean we shouldn’t embrace it. Quite the opposite, we should try to get it into as many “good” hands as possible.

So I was somewhat gratified to see an op-ed piece in today’s New York Times saying that Al Qaeda, once marveled at for its understanding of how to leverage the web for its means, is so Web 1.0. For a moment, anyway, it seems like I can justify my theory. “Try to imagine Osama bin Laden managing his Facebook account, and you can see why full-scale social networking might not be Al Qaeda’s next frontier,” writes Daniel Kimmage. He goes on:

It’s also an indication of how a more interactive, empowered online community, particularly in the Arab-Islamic world, may prove to be Al Qaeda’s Achilles’ heel. Anonymity and accessibility, the hallmarks of Web 1.0, provided an ideal platform for Al Qaeda’s radical demagoguery. Social networking, the emerging hallmark of Web 2.0, can unite a fragmented silent majority and help it to find its voice in the face of thuggish opponents, whether they are repressive rulers or extremist Islamic movements.

Right on. But that’s not it. Kimmage wraps up his piece with the affirmation that the Internet is increasingly contested ground in the Arab world. And that the censorship imposed on the Internet by countries like Egypt, Saudi Arabia, and Syria—all on Reporters Sans Frontières’ black-hole list—is not only impeding the obvious (an informed and engaged citizen-led society). By limiting the amount of access the “silent majority” has to sites like Facebook and Flickr, they are depriving their citizens and the rest of the world of the very voices who could deal the terrorist network its most “damaging disruptions.”

The opinions expressed here are solely the author’s.