After the deadly Beirut blasts, friends and families from outside and inside of Lebanon immediately began checking in on one another, using Whatsapp, Facebook messenger, SMS, and of course, phones. It was a chaotic moment for many as the number of fatalities quickly increased to 43, with more than 200 injuries in Burj al Barajneh, a busy market south of Beirut.

Two nights later, tragedy hit Paris. Shortly after the news broke, Facebook activated its Safety Check feature, allowing Parisians and those with friends in the French capital to mark themselves “safe” on the platform. For many, being able to see in one place that their friends are safe was a source of comfort. 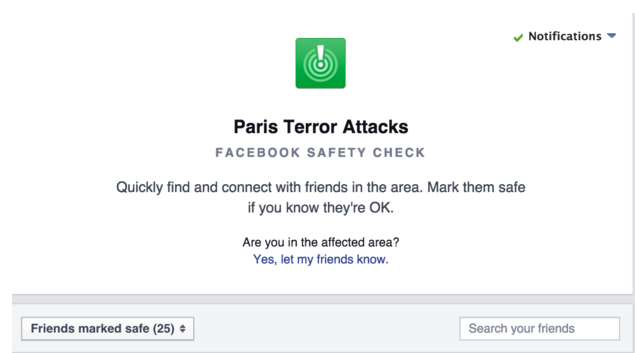 It didn’t take long for Lebanese to start questioning why the feature hadn’t been used following the attack in Beirut. Blogger Elie Fares, in a post titled “In a world that doesn’t care about Arab lives”, demonstrated the discrimination many have felt in Beirut, from the media dehumanizing the innocent dead people in a busy market to Facebook’s launching of the Safety Check in Paris but not Beirut. He wrote:
“When my people died, no country bothered to lit up its landmarks in the colors of their flag. Even Facebook didn’t bother with making sure my people were marked safe, trivial as it may be. So here’s your Facebook safety check: we’ve, as of now, survived all of Beirut’s terrorist attacks.”

Similarly, Najib, writing for Blog Baladi, argued: “Speaking of alerts and attacks, I think it would be quite useful if we have [the safety check] feature for Beirut and for the Arab World as well. We’ve had over 20 bombings and attacks since 2014 and at least 10 of them were against civilians unfortunately.

That way, and since the Facebook penetration in Lebanon is extremely high and lines are usually down after bombings, those who are in the affected area can let their friends and family know that they are safe.”

This issue didn’t go unnoticed without some Lebanese cynicism, as Rani tweeted:

Even the Beirut bureau chief of the New York Times, Anne Barnard, expressed in a Facebook post what Elie and Najib mentioned. She later penned a piece looking at Lebanon’s general reaction to the media’s treatment of the Beirut and Paris attacks.

Facebook quickly took note of the complaints and, in a post, explained that Paris was the first time the feature had been rolled out for a non-natural disaster:

“This activation will change our policy around Safety Check and when we activate it for other serious and tragic incidents in the future. We want this tool to be available whenever and wherever it can help. We will learn a lot from feedback on this launch, and we’ll also continue to explore how we can help people show support for the things they care about through their Facebook profiles, which we did in the case for Paris, too.”

“All in all, our message went through and the “Safety Check” will probably be enabled for all in the future. However, what matters the most now is that we figure out a way to stop these terrorist attacks from happening and never have to use this feature in Beirut, Paris, Baghdad or anywhere else.”
And Habib Haddad drew together the suffering of Beirut and Paris, sharing this graphic in a tweet:

This article was published first on Global Voices.